CNRP which is born by the combining between SRP and HRP has seen been survived by the Cambodian abroad to inject money for its political movement. SRP for instance, has survived because of many generous Cambodians living abroad who love democracy and human rights, have tremendously and continuously donated money to support this democratic party.

Political analysts believe that CPP can not subdue democratic movement in Cambodia, if CPP cannot stop the donation from Cambodians abroads. This is one of the important political tactic for CPP to win over democratic party in Cambodia as this party has been gradually seen by the Cambodian people and international observers as a communist party, not a democratic party.

Hence, the combination of two, CNRP, gained its momentum and in just one year old, this party has become the front line opponent of CPP. However, this one year old born baby must learn and prepare many things to compete with the CPP. One of its important policy is to strengthen support-based agents among Cambodians abroads. But recent change through the inconsistent guidelines for abroad supporters is in doubt of destroying its supporting base rather than embodying a long-sighted policy.

According to the sources I received from public domains: 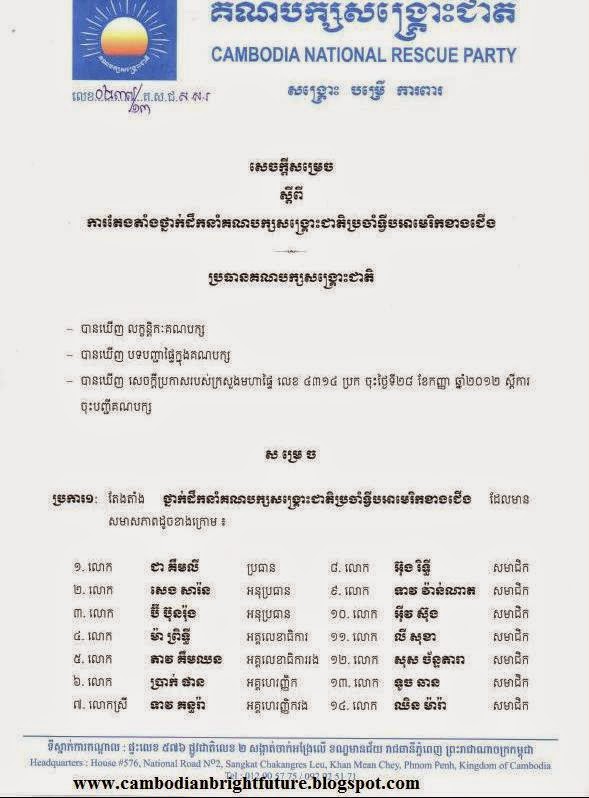 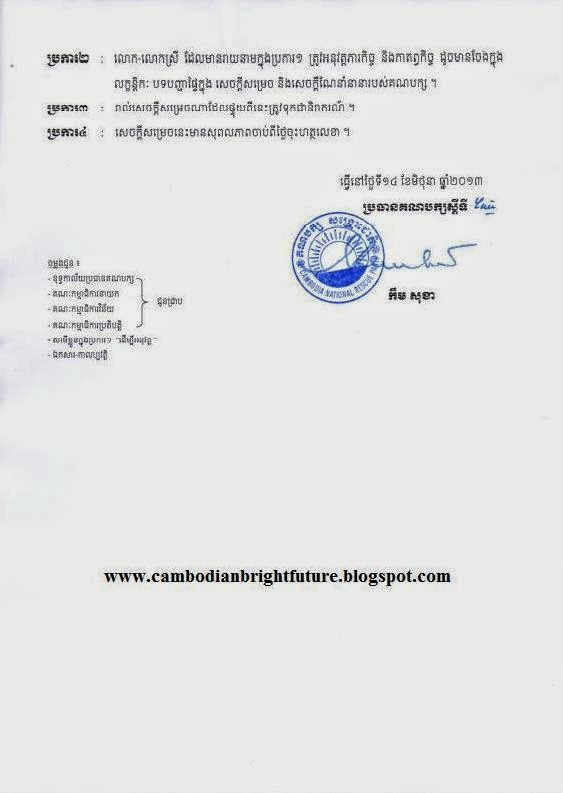 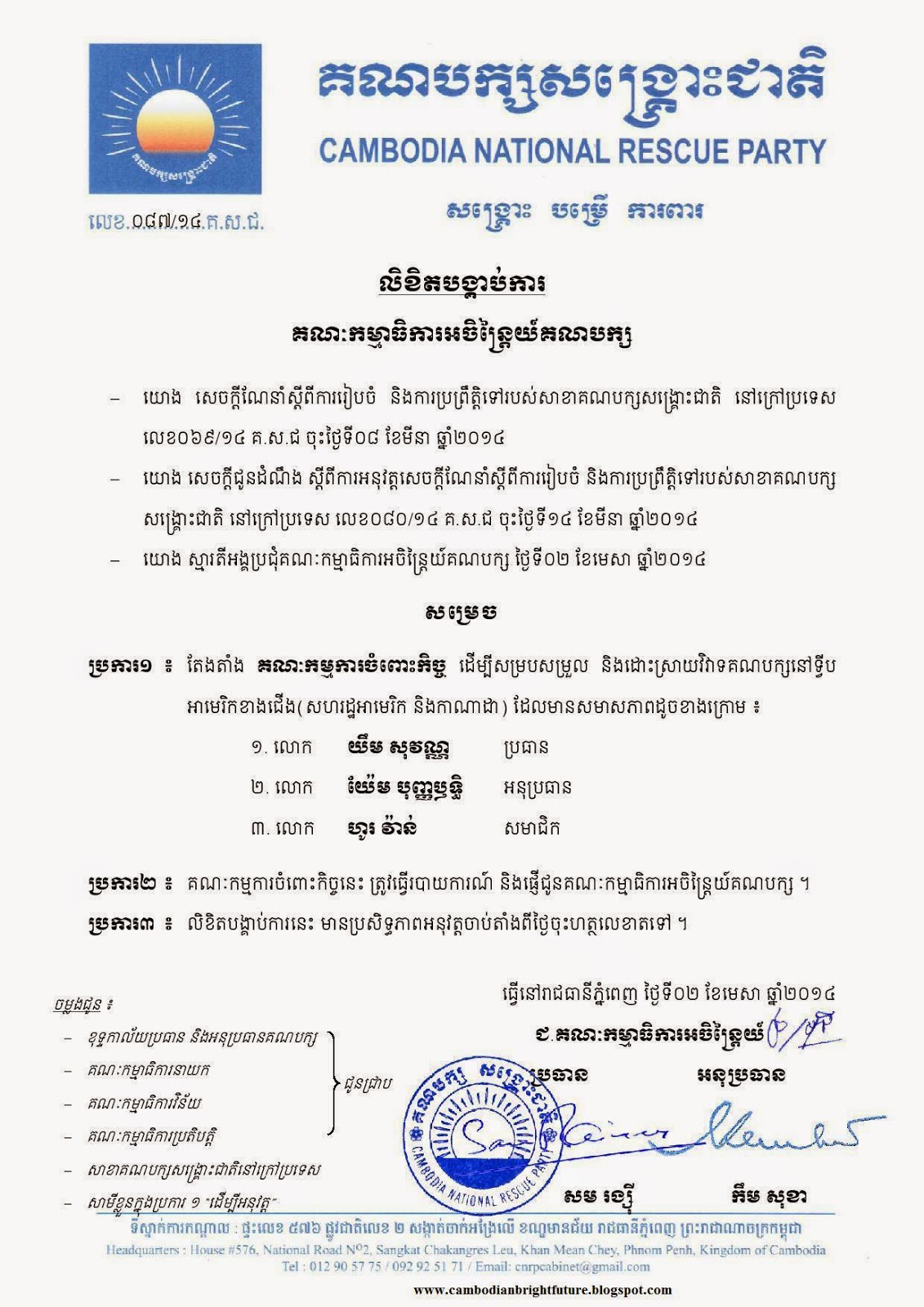 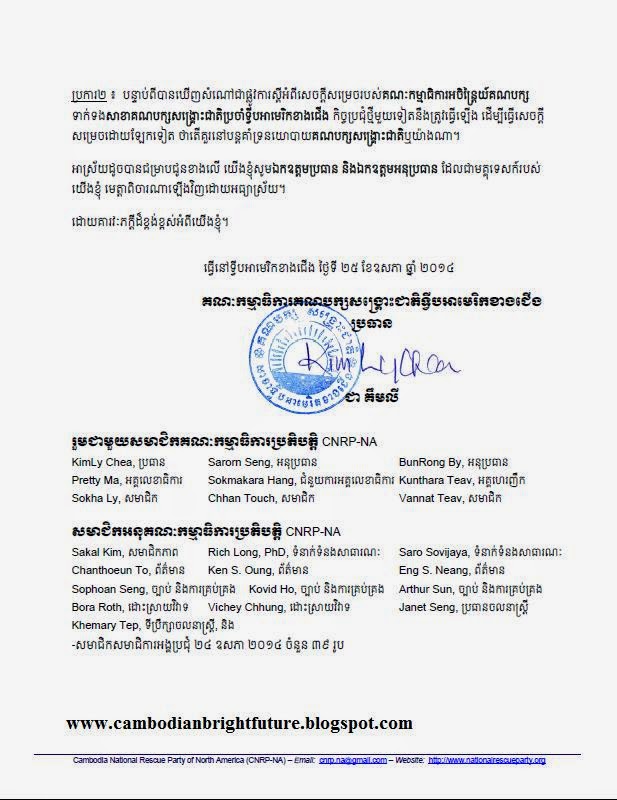 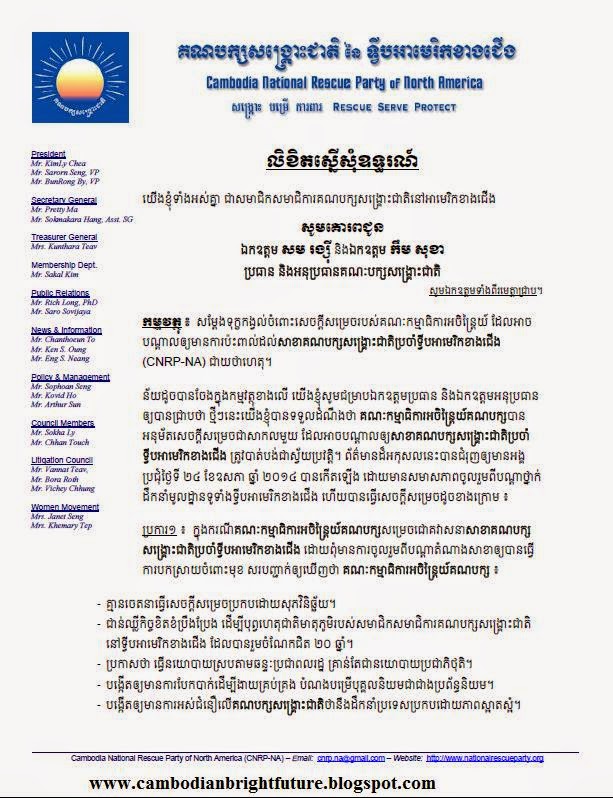 Traitor of the Nation

A Tale of "A Strongman in a Weak State"

1. Unable to protect the weak, the poor, the destitute, the farmers and the indigenous people from being bullied by the powerful people and the elites.
2. Unable to protect the chapters inscribed in the National Constitution, people are perpetually jeopardized by the powerful political rhetoric, and the assembly is using major voice to silence the minor voice.
3. The election has not produced any fair and productive result, though the powerful can hide all the complicate procedures of election, but the powerful cannot hide the outcome of the election. The CPP received only around 50.3% of all valid votes (6 millions) but CPP can grab 90 seats or almost 90% of the parliamentary seats (123). The outcome of this election is unrealistic of both winner and loser.
4. Cambodia is a weak state because this country is led by a patrimonial system, favoritism, cronyism and family kleptocracy, not by the rule of laws...from Hun Sen to Sok An and others are running over their contenders' toes inside CPP irresponsibly. This patrimonial system will finally end up with internal conflict that can inflict Cambodian people in the whole nation.
5. Cambodia is moving towards self-destruction because of the unrealizing of Ho's Dream of Real Estate Business in Cambodia: trying to demarcate the border with border-pole installation but disguise their strategy via planting Vietnamese population in Cambodia as their special agent and eternalizing friendship with their former subordinate, the CPP.

Khmer Young
"You must be the change you want to see in the world."---Ghandi khmeryoung@gmail.com

They that can give up essential liberty to obtain a little temporary safety deserve neither liberty nor safety. by Ben Franklin

The ultimate tragedy is not the oppression and cruelty by the bad people but the silence over that by the good people. by Civil rights leader Martin Luther King Jr.

Three leaders, one Siam, one Viet, and one Khmer, come across a lamp and a genie pops out of it.

“I will grant you each one wish; that’s three wishes in total,” says the genie.

The Viet leader is amazed, and asks, “I am curious about this wall. Please tell me more about it.”

The genie proudly explains, “Well, it is 50 metres high, 20 metres thick protecting Cambodia so that nothing can get in or out without permission.”

The Viet leader says, “Ah, it is getting tough. My uncle Ho always wants to expand the real estate. So my wish is to have Khmer leaders as our gofers for all eternity.”

Again, with the blink of the genie’s eye, the Khmer leader bows and invites the Vietnamese leader in.

The Siam leader says, “Fill the wall up with water.”